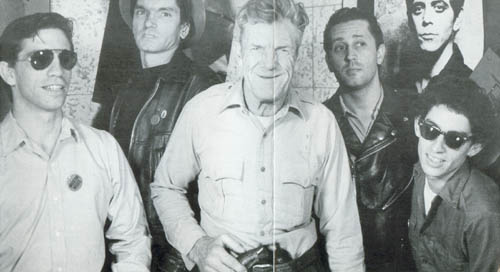 
Really Red may not qualify for most beloved or dearly remembered early Texas punk band, but they were certainly the best in many respects. The band's sound evolved — unmistakable but ever-changing — with every release, and the law of diminishing returns never applied. They managed to be political without being heavy-handed or tiresome. Really Red's pièce de résistance is their Teaching You The Fear LP, mercifully re-released by Empty Records in 2004. I don't know of a more original, enduring U.S. punk full-length. 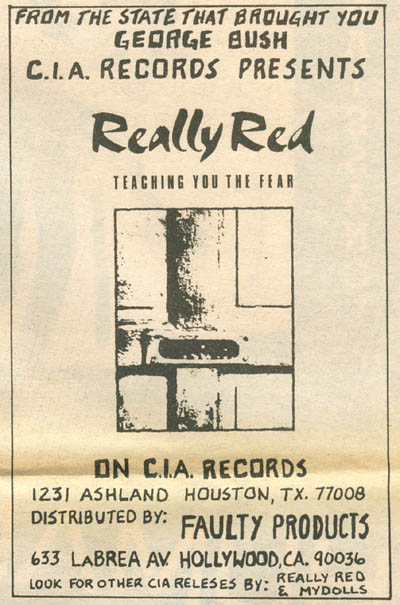 For the uninitiated class and minutia sponges of the world, here's some background. First of all, the name Really Red and what it means according to different band members...

"I was (am) a printer, and I was trying to think of something non-sensical that people could extrapolate a bunch of non-related meanings to. For some reason, Red (magenta) crossed my mind, and Really Red came to be. Our political leanings meant we could be considered "reds", communists. That was bullshit, but if it got people to think, that was O.K. with us. I would request that you run this by the others, in case there is an alternate explanation."

"Kelly used to be gay, and that was his favorite lipstick color."

"The name Really Red came from a situation where we were trying to come up with something interesting and profound, of course! We looked at other band names like King Crimson, Pink Floyd, Sex Pistols, and all of the other ridiculous names that bands have had in the past. Through a deeply religious experience (drinking booze, playing hard, staying up late doing naughty things), it turned out that we had practice the next day and someone mentioned that someone else's eyes were 'really red'. Voila! A most mystical occurrence! An incredible quark of nature! A true quantum experience! This went beyond all reasoning. Something so profound from such a meager beginning."

Starting with the band name on through the reissuing of their records, Really Red member's diverging remembrance of things past and present remained a constant theme. Woe is the biographer who seeks one truth! John Paul said it best when he wrote:

Really Red was a band committed to freedom of expression, political statement, some misguided opinions, and a lot of volatility. We were a group of people who were all individuals, and none of us liked to give an inch. That is what made us good. I used to think of the one thing, that day, that ticked me off more than anything just before I got on stage. Then I spat (not on people) venom and took my anger out on my machine. I found that by being as tight as hell musically, then it didn't even matter what you were saying because people rarely understood it anyway unless you had a lyric sheet. I can remember times when we were so fast and so tight that the feeling was unreal. Kelly and I wrote all the music. Ronnie didn't want to 'sing' anybody else's lyrics so we went along with that as long as we agreed on the content. After all, Ronnie sang, and we played.

Really Red as a group worked hard. We practiced every Tuesday, Wednesday, and Sunday afternoon without fail. If you were hung over, pissed off, not feeling good or whatever, there were no good excuses. You showed up, and you played. We were a band that jammed for hours on end. We played stuff we didn't even know what it was. We just jammed. Through the jam we came up with interesting riffs. Through the interesting riffs (where were usually very simple in the beginning), we would develop a bridge (from another interesting riff), and come up with a beginning and end. Sometimes we would come with the beginning, sometimes the end was first. The pieces changed constantly, sometimes in concert. There were no rules except participation by all. We were a band. We all worked hard. I always tell young people who want to 'play' that you have to commit, you don't let everyone else down just because you don't feel like it today. We are a poorly motivated society these days, and I have very little patience for assholes who think being a punk or a hippie means doing nothing and staying stoned. 'I Refuse To Sing' is an example of our feelings toward idiots who wreak havoc on their own because they think the music gives them permission. One thing is for sure: Really Red had integrity and a lot of faults and through that friction came fire.

Ron Bond (a/k/a U-Ron Bondage), the man responsible for Really Red's words and with whom I've had some words myself, had this to say:

Being involved in the explosion and turbulence of the Texas and American punk movements of the late 70's and early 80's was a truly exciting and gratifying experience. The bands, audiences, publishers, artists, and DJs were cutting their way through uncharted areas, breaking lots of rules as they invented a new counter-culture. Being a small part of the lives of the wild, inspiring, and often crazy people that we met along the way was well worth the time, money, and energy spent — not to mention the often frustrating experiences with rip-off promoters, cheap motels, lousy sound systems, unresponsive DJs, and abusive police. There are many ways to measure success. REALLY RED never had any dream of becoming stars nor was our intention ever to "get signed" by a major label (a goal that seems all too common with so-called alternative bands of the 90's). Our aim was to be somewhat of a catalyst (however small) for thought, outrage, fun, action, and ultimately CHANGE and to have a great time provoking it. I don't know if we succeeded or failed in that area. But I do feel that we turned out some good music, for our limited abilities and the somewhat restrictive musical genre we chose. It is most gratifying to know that we are still remembered by a few. Thank you to those who were there then and those of you who are listening now. Never give up.

Really Red self-released all their own records on the CIA label, and U-Ron ran a record store in Houston called Real Records. There were six original releases plus some contemporary and posthumous compilation appearances. It all started with...

Far "tamer" than what would follow, their 1979 debut was a source of embarrassment
for some members and was mostly undistributed until the 1990's. It's a great record.

With good reason, this second 45 is the most sought-after of Really Red release. 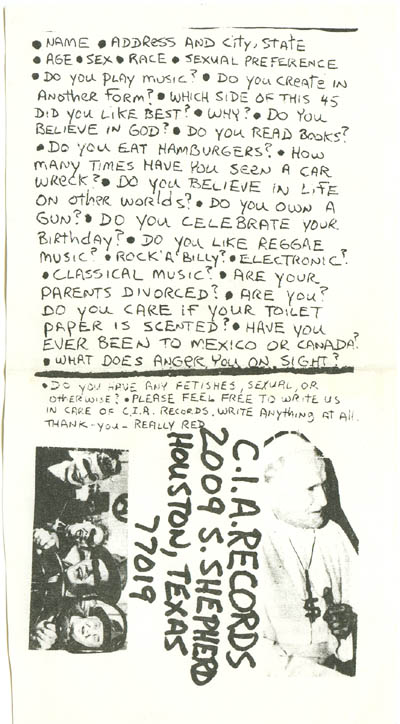 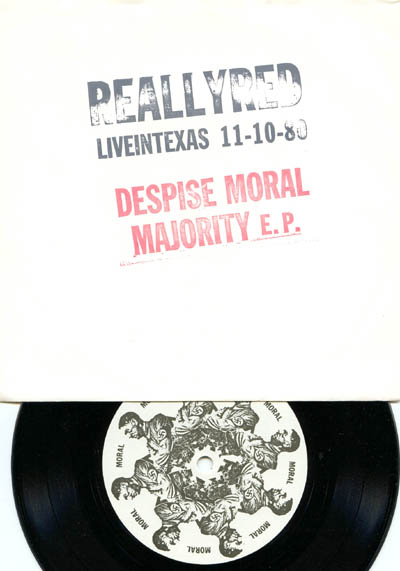 The toughest to find in nice condition, but the least essential of the 45's. 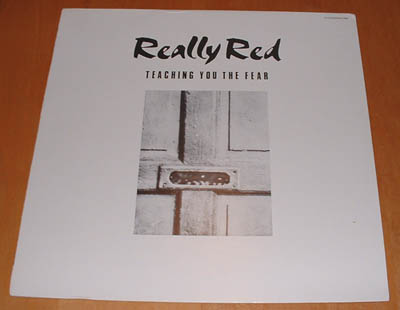 The white cover indicates a first press. The second press (and reissue) are black.

1981 also saw the inclusion of "Prostitution" on the Let Them Eat Jellybeans LP. 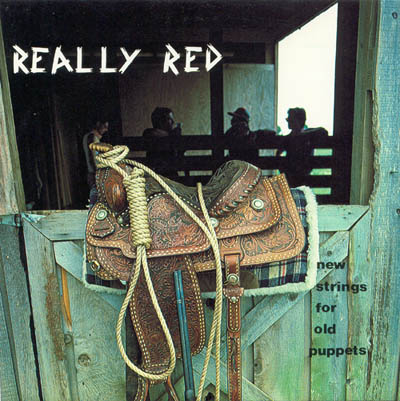 Last (their fourth) but certainly not least 7in. released in 1982 EP.

A year later in 1983, the track "Nobody Rules" was included on the
Cottage Cheese From The Lips of Death compilation LP (Ward 9). 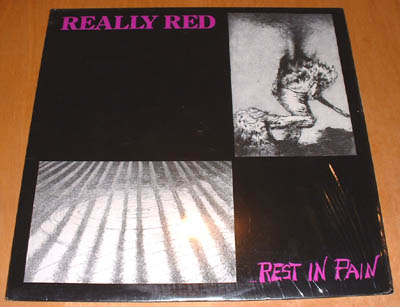 A near complete discography CD was issued on Angry Neighbor in 1993 and was later reissued by Break My Face using leftover Angry Neighbor cover stock. Really Red's cover of "Downtown" was included on the Rather See You Dead compilation EP (Hot Box, 1996). The "Crowd Control" 45 was included on my reissue compilation Deep In The Throat of Texas along with five other early Texas punk 7in. And, of course, several Really Red tracks can be found sprinkled throughout bootleg compilation series like Bloodstains and Killed By Death.

Ready to learn? Empty Records reissued Teaching You The Fear in 2004. Click the pic.